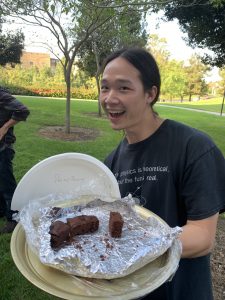 I mainly work on the history and philosophy of science, particularly on 18th century figures like Newton, DuChatelet, and LeSage. I'm mostly interested in what scientists took themselves to be aiming at doing.

Born and raised in Southern California, I somehow never left! But I did leave my original field of physics to explore history and philosophy---as they pertain to physics (and science in general)! In my free time, I enjoy reading; hiking; and cooking/baking, especially odd things like seafood-based desserts.

I entered undergrad thinking that 1) the humanities were a waste of time and 2) religious people were dumb. I thought 1) because, well, what kind of job can you get with a humanities degree!? And I thought 2) because I had been taught that there was a "warfare" between science and religion---just look at what happened to Galileo! But then I took a few history of science courses and learned that I was wrong; the relationship between religion and science isn't so simple as one shutting down the other. And a few philosophy of science courses showed me that, contrary to my physics-major inclinations, the world of science wasn't some bastion of absolute, pure rationality; scientists are people too and they do people-like things (like making mistakes)! Realizing all this made me reflect on how much of my worldview---and hence my (lack of) tolerance of humanities majors and religious people---was founded on false impressions of science. As a consequence, I think I've become a more tolerant (and tolerable!) person.

And so, while I'm still not sure about finding a job, if the humanities concerning science (the "stemanities" as I like to say) can make you a better person, then surely they're worth pursuing---and sharing!