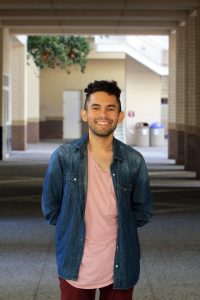 I study how listeners detect sounds at some frequencies while ignoring sounds at other frequencies. This ability (known as “frequency selectivity”) helps listeners recognize speech and appreciate music.

I’ve worn many hats. I was once project manager for an aerial robotics team at UCLA. I worked for an archaeologist, combing the desert for petroglyphs. Now, I’m a PhD student in the Chubb-Wright Lab at UC Irvine where I study hearing. I like to make music, my favorite short story is “The Library of Babel” by Jorge Luis Borges, and I’ve lived in California for a quarter-century.

To make this happen, an impactful scientist puts their work in front of a wide audience. Besides other scientists, they communicate with legislators, government agencies, and the public. Research has value for many people, and science communication is how that value is shared.