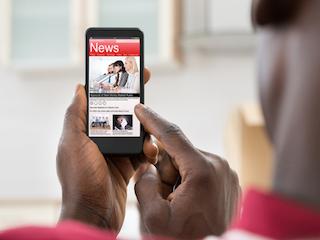 Watching the news on your phone? You might be missing out!

It’s the information age! We can catch up on the latest news on watches, phones, jumbo flatscreen TVs!  But does the SIZE of our gadgets affect our response?

Johanna Dunaway from Texas A&M and Stuart Soroka from the University of Michigan investigated. They recruited over one hundred participants to watch seven random news stories, both positive and negative. For example, one piece was about making bagpipes, another – about food shortages.

The subjects watched the stories in either a laptop-sized or smartphone-sized window. The researchers hooked the participants to a device similar to a lie detector. Then they measured how much attention the watchers were paying to the news segments. They also tracked their emotional response to the content.

People watching the news in a smartphone-sized window were less attentive and emotional about the content of the stories. The researchers think that we might digest information differently depending on the size of the device we get it from!

LOL cat videos, though? The bigger the better!