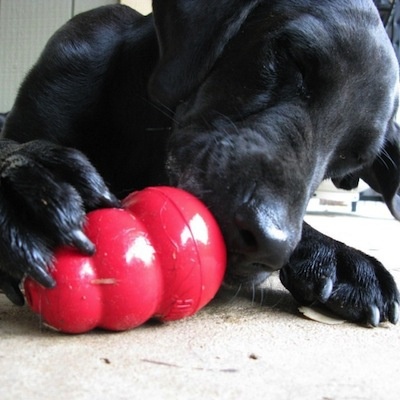 Many canine experts say dogs are smarter than wolves. That’s based on studies where researchers gave both animals unsolvable tasks. Like: removing treats from jars. Dogs usually give up. They turn their big puppy eyes to nearby humans for help. Wolves, however, soldier on.

Recently, animal science researcher Monique Udell questioned this. After all, dogs are bred to expect our help. So is the comparison really fair?

Udell devised a new test. Instead of unsolvable tasks, she used a tricky—but solvable—task. She placed treats in containers with a rope attached. Tug the rope while holding the container down, and voila! She tried it with pets, shelter dogs, and wolves.

Pet dogs gave up. One shelter dog got it. With human encouragement, a few more did, too. But the wolves? Mostly aced it!

Whatever it takes to get treats! Woof.