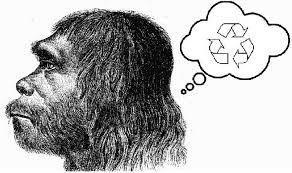 Did Wilma have to remind Fred to sort the recycling?

Life wasn’t easy four hundred thousand years ago. There was no Cave Depot! What to do when your sharp rock breaks?

Recycle it! Archaeologists recently found that early humans would reuse small shards of broken tools, like hand-axes. But why? Dr. Flavia Venditti from Tel Aviv University led a team to dig deeper.

The cave her team investigated was incredibly well preserved. They uncovered a huge number of small, sharp shards reused as tools. The large number meant that the recycling was a planned, consistent activity – much like it is, or should be, in many households today!

Chemical and microstructural analysis showed that each of the tools had a specific use. Some were made to chop vegetables, some sliced meat, while others scraped bones. Perhaps for soup? Bon appetit!

Dr. Venditti says that early humans were CONSCIOUSLY recycling. This level of planning means our ancestors may have been smarter–and more eco-aware–than previously thought.

So the next time YOU mess up your recycling, remember: even a Flintstone can do it!