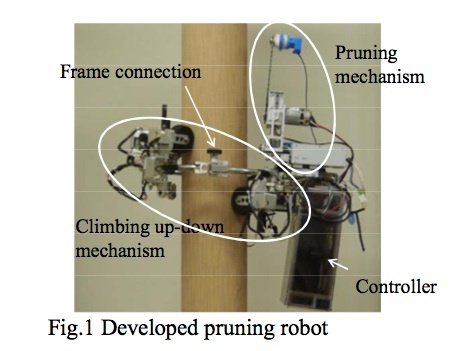 Lumberjacking is dangerous work for humans. How about for chainsaw-wielding robots?

There the problem is power. Climbing gobbles energy, as does holding robots vertically in place. So most climbing ‘bots need huge batteries.

Inspired by human climbing techniques, robotics engineers from Japan’s University of Gifu had an energy-saving idea.

Lumberjacks inchworm up trees using moveable ropes. With a rope encircling them and the tree, they lean away from the trunk, pressing their feet against the trunk. Friction holds them aloft.

Imitating this, the engineers mounted a chainsaw on a wheeled ring. The ring snaps around a tree trunk. A controller presses the lower wheels against the trunk. The bot’s weight holds it in place!

Power it on, and the wheels roll up the trunk. Meet a branch? Engage the chainsaw. Wrrzzzzzz! All using minimal power.

Is a Japanese giant-chainsaw-robot monster movie next? Sawzilla? Dare to dream!