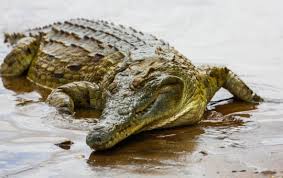 Do crocodiles like the Crocodile Rock …or do they prefer classical?

When you get a concussion, doctors use an MRI to take pictures of your brain. Remember that big hollow tube that patients lie down inside of on Grey’s Anatomy? Imagine a crocodile chilling inside one!

An international research team led by Ruhr University Bochum did just this. For the first time EVER, they scanned a cold-blooded animal’s brain! Five crocodiles, to be exact.

During the scan, the group exposed the crocs to light shows and soundtracks. Think flashing red and green lights, then random noises. They also played classical music composed by Bach. The researchers then watched how the croc’s brains reacted.

Certain areas of the reptilian brain LIT up when lulled by the sophisticated symphony. These brain patterns are similar to those detected when mammals and birds listen to music. The team believes that these senses were passed down from the same evolutionary family tree.

So, did we find out if crocodiles LIKE classical music? Who knows! Maybe they’re even bigger fans of the BACH-street Boys!