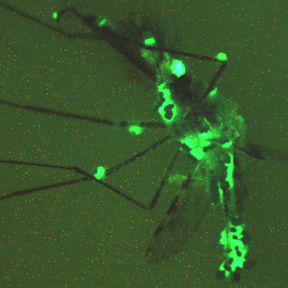 What do you get when you cross a mushroom with a spider?

Mosquitoes are not just annoying — some are deadly! Anopheline mosquitoes in Africa transmit life-threatening diseases like malaria with one bite. What’s worse, they’re becoming resistant to insecticides!

Fortunately, a fungus named Metarhizium naturally infects and kills mosquitoes with toxic spores. Unfortunately, it works too slowly to prevent the spread of malaria.

Enter Brian Lovett of the University of Maryland and an international team of scientists. They gave this fungus an upgrade by splicing in a gene for making spider venom. Once it infiltrates a mosquito, Metarhizium becomes a deadly venom factory!

Lovett and his team filled an enclosed environment with malaria-carrying mosquitoes. Then they added cotton sheets covered in spider-powered fungus.

And…it worked! The venomous Metarhizium wiped out HALF of the mosquitoes within a few days!

Even better? It ONLY infects mosquitoes. People, pets, and helpful insects, like bees, aren’t affected. The team hopes their hybrid spider-fungus will be the key to preventing malaria.

Unfortunately, these mushrooms… ? Not so good on pizza.