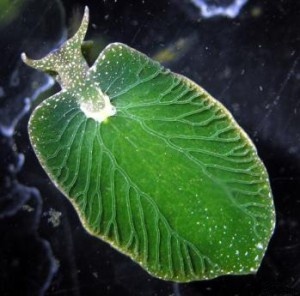 What’s more, these marine animals eat algae, a plant. Then somehow they use the algae to conduct photosynthesis! They make food from sunlight just like plants do!

Marine biologists theorized the slugs do this by incorporating algae chloroplasts into their cells. Chloroplasts are the sites in plant cells where photosynthesis occurs.

But how are animal cells able to operate plant chloroplasts?

The researchers suspected it happens in two stages. Each generation, adult slugs eat algae, then pass on to their offspring the ability to use chloroplasts.

To find out how, the researchers fed algae to adult slugs, then let them reproduce. They then ran genetic tests on the larvae, who, unlike their parents, had never eaten algae.

Turns out the chromosomes of the larvae had incorporated genes from the algae their parents digested! It’s a rare and amazing example of gene transfer between organisms!