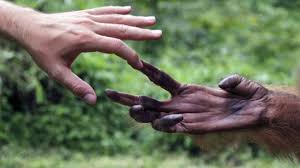 Primates are our closest relative. But our hands evolved very differently. They don’t have nearly the dexterity we do. How did we humans get to be so…handy?

Many anthropologists think it’s because we developed tools. However, Tracy Kivell at the University of Kent thinks there’s more to the story.

Before typing and texting, our hands were using tools to make meals. The most prized meal? Delicious, nutritious bone marrow!

The researchers believe that a taste for bone marrow led us to develop tougher, more nimble hands!

So while a handshake might be a little awkward, I’m sure our primate cousins would still appreciate a good ol’ fistbump!