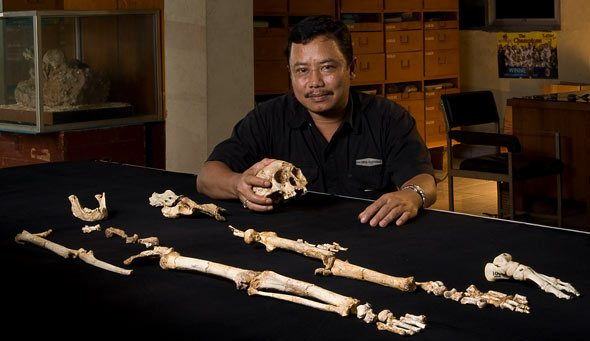 This is Sandra Tsing Loh with the Loh Down on Science, taking you to Indonesia’s Flores Island.

In 2003, archeologists unearthed a fossilized female skeleton there. The ancient human was only three feet tall. But she was an adult, so the scientists dubbed her “the hobbit.”

They didn’t want to damage the bones, so to date her they analyzed samples from the cave where she was found. They came up with an age of 18,000 years.

Which put her roaming Indonesia at the same time as modern humans. And that made critics wonder: Was she really an unknown species of human, or a stunted, diseased version of Homo sapiens?

The issue has finally been settled. New analysis puts her age as older than 60,000 years! So she predates the arrival of modern humans to the area by a lot.

How’d scientists get her age so wrong? Well, the cave has very complex geology. It took analyzing more areas, and the bones themselves, to get things right.

Her species name? Homo floresiensis. But to me, she’ll always be little Mrs. Baggins. Awww.