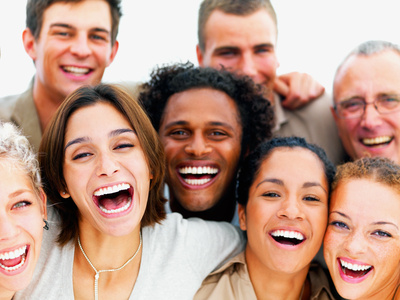 “We’re not laughing at you, we’re laughing with you!”

This is Sandra Tsing Loh with the Loh Down on Science – saying, perhaps!

Maybe it’s the chuckling snort of your Grandpa Al. Or the appletini-infused cackling at a ladies’ night out. In any case, the way we laugh, and who we laugh WITH, says a lot about us.

Which led researchers at UCLA to wonder: Can laughter alone indicate how well people know each other?

They studied subjects from over 20 different countries. First, the subjects listened to snippets of two people laughing together. Then, they were asked to decide if the pair were friends or strangers. Sounds hard, right?! Well…

It turns out that subjects were able to differentiate friends from strangers over fifty percent of the time.

And, this was even easier to do if the pair laughing was female!

What does this show? That non-verbal cues like laughter are universally powerful indicators of social relationships. And because they transcend societal customs, they seem to be evolutionarily based.

Which may be another reason we outlasted Neanderthals. They just couldn’t take a joke! Or tell one.