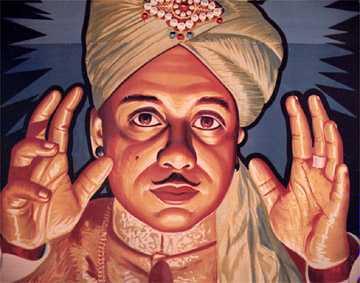 You too can have ESP! It’s as easy as…putting on your hat?

Ever wonder what your friends are REALLY thinking? For example, do they actually love your new haircut? Well, knowing the answer might be possible – thanks to technology

Meet Rajesh Rao from the University of Washington. He created a video game called BRAIN-NET. It’s like playing Tetris With Friends… blindfolded!

Three players wear special hats to help them share their brain signals. Two players, the “Senders,” watch Tetris blocks on the screen. The third, the “Receiver” can’t see it.. If the incoming Tetris block needs rotation,, the Senders focus on the word “YES” on their screen. There’s a light blinking underneath the word.

The Senders’ brains interpret and send the flashing pattern to the Receiver — via the special hats!

Does this actually work? Yes! Over eighty percent of the teams cleared the Tetris row during sixteen games! Researchers hope BRAIN-NET inspires future technology to help people communicate and solve difficult problems – together. Using only their minds! And some special hats.

One step closer to Spock’s Vulcan mind meld! If not his hair cut.