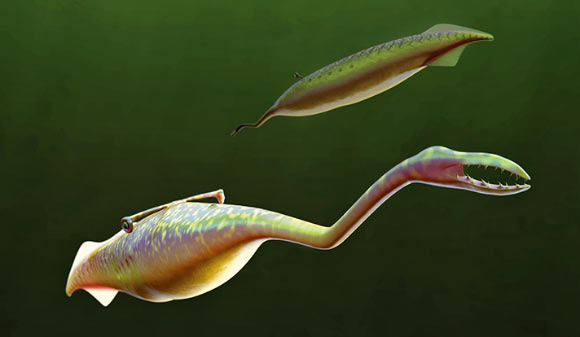 Learn from our mistakes: Don’t use that line.

For the record, California’s state fossil is the saber-toothed tiger, of course!

Naming fossils is the easy part. Finding where they go on the evolutionary tree? Much harder. For decades, Illinois’ state fossil was a puzzle.

Named for its discoverer, Francis Tully, it’s a sea creature called Tullymonstrum gregarium. “Tully monster” for short! At just a few inches long, it’s only monstrous looking. Pixture a soft squid-like body with a sort of giant lobster-claw for a head. What on Earth could it be related to?

Once, paleontologists sidestepped tricky classifications: They just said specimens belonged to extinct branches of the family tree. Modern science has more tools at its disposal—tools that Yale University scientists used to analyze twelve-hundred Tully monster specimens. Their conclusion? It had features in common with the modern eel-like lamprey.

Sure, that’s a parasitic sucker fish, but who are we to mock fossils? Ours is a cat that needs braces. Meow.