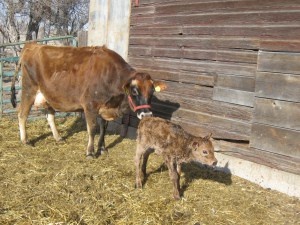 Does mom play favorites … with milk?

This is Sandra Tsing Loh with the Loh Down on Science, saying:It seems like an odd question.

But since the 1970s, scientists have been studying whether mother animals treat daughters and sons differently. And, at least in terms of lactation, the answer is often “yes.”

Meet anthropologist Katie Hinde of Harvard University. She studies milk production in different species. Take rhesus-monkey moms. They produce milk with more sugar for daughters, but more fat and protein for sons. Calm down; the calorie count of both types is the same.

Why would mother’s milk vary by sex? Well, you could argue that males need more protein to build bigger muscles. Okay, but in Holstein cows, female calves get several hundred pounds more milk than male calves do. That’s more fat, sugar, and protein!

So it’s a complicated issue! Which is why Hinde says it’s still an open question in evolutionary biology.

As for humans? To avoid any gender imbalance, I say chocolate milk for all! And you’re welcome.