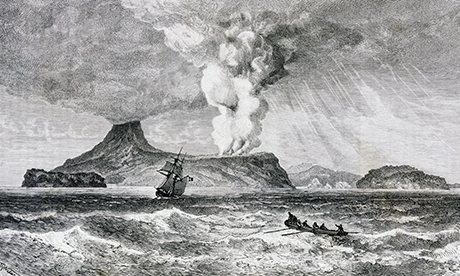 Can a volcano cause global… cooling?

This is Sandra Tsing Loh with the Loh Down on Science, going back in time to…

The early 1800s. When it’s cold! Throughout Europe and North America, there’s frost, and famine.

That cold spell was blamed on the eruption of Indonesia’s Tambora volcano, in 1815. Volcanos cause major climate disruption by injecting massive amounts of sulfur dioxide into the atmosphere. This blocks the sun’s warming rays.

But the cool-down actually started several years earlier. Deposits found in the ice in Greenland and Antarctica point to another volcanic event – dubbed the “Unknown Eruption.” News of the time never mentioned it. What was this “mystery volcano?”

Caroline Williams of the University of Bristol dug into the writings of two prominent Latin American scientists of the day. One was in Colombia, the other in Peru.

Both scientists described atmospheric phenomena consistent with volcanic activity: a “transparent cloud” that turned the sun silver. Twilight afterglows. Crop-killing ice and frost. Their accounts pinpoint a tropical volcano that blew its stack around December of 1808.

Aha! So that’s why Beethoven rolled over!