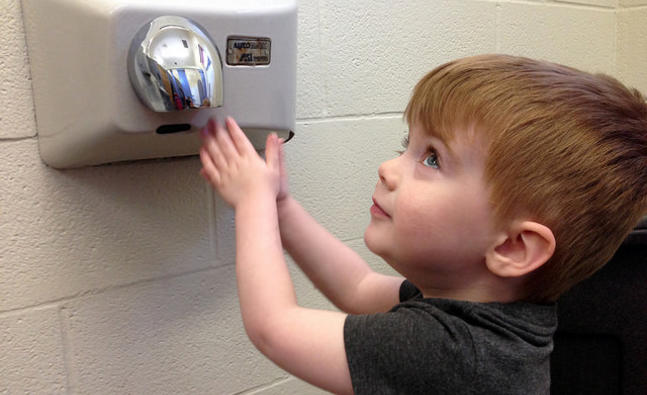 Don’t forget to dry your hands! WHAT? What’d you say?!

Many public restrooms have electric hand dryers. It saves trees and cuts down on trash! But those noisy contraptions have little kiddos covering their ears!

Young scientist Nora Louise Keegan from the Calgary Board of Education was on the case! Decibel-meter in hand, Keegan visited forty-four public restrooms across Alberta, Canada to interrogate their dryers. She measured dryer loudness at a variety of heights and distances from the blast. Pretty resourceful for a thirteen year old!

What did she learn? Roughly three out of four dryers were LOUDER than a garbage disposal. That level puts people at risk for hearing loss. About half were louder than a motorcycle! That volume exceeds Canada’s legally permitted sound level for TOYS!.

Excessive exposure to loud noise contributes to hearing loss and ear damage, which can be permanent. And noisy hand dryers are often placed at a child’s ear level. This could affect youngsters for the rest of their lives!

Thanks to Keegan’s efforts, some dryer manufucturers are looking to reduce their sound levels.

But in the meantime, don’t forget your protective earmuffs on the way to the loo!