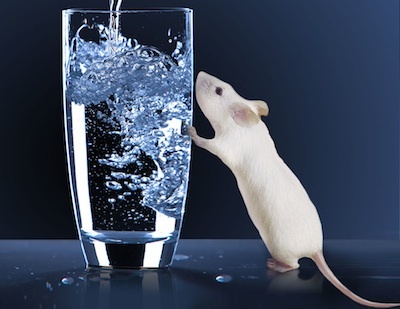 Obey your thirst! Your brain commands it!

Meet Yuki Oka of the California Institute of Technology. He and collaborators have a thirst for knowledge. Literally! They’ve pinpointed two groups of cells in mouse brains that control thirst. Kind of like an on-off switch for drinking.

The group first injected a virus into mice that made their brains sensitive to laser light. Then, whenever the team shone a custom embedded laser into one set of brain cells, the mice started drinking water—even if they weren’t seemingly thirsty. They’d drink as much as eight percent of their body weight! Whenever the laser shone on the other group of brain cells, the mice stopped drinking.

Oka thinks the research will help us understand disorders that cause people to drink too much or too little. Water, that is. The laser light didn’t affect cravings for other beverages, or for food or salt.

I’ll drink to that! But only water. I swear!