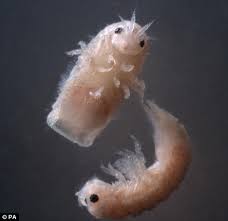 Gas prices have you feeling CRABBY?

Fossil fuels aren’t going to be around forever. Fortunately, scientists are finding new ways to develop similar fuels from wood! But turning wood into fuel might need the help of a little friend.

Introducing: The gribble! The roly-poly of the shoreline, this tiny crustacean helps clean our beaches of wood – by eating it! What’s more, while animals need bacteria to help digest food, gribbles don’t! So what’s their secret?

The researchers took a closer look at gribble guts, and — surprise! The gribbles had hemocyanin, an oxygen-carrying protein, in their bellies!

Mimicking the gribble, the researchers treated wood with hemocyanins to see how well it broke down.

The researchers believe this protein might lead to cheaper renewable fuels in the future.

Gas prices too high? As Dr. Seuss might say – “Don’t quibble – get a gribble to nibble!”