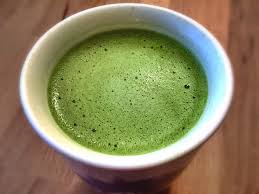 This is Sandra Tsing Loh with the Loh Down on Science, hopping on the yummy Boba craze!

Quantum dots lack the starchy goodness of tapioca pearls, but still pack a cancer-fighting punch. They are crystals five thousand times SMALLER than the width of a hair. The trouble is, making them involves toxic metals and acids.

Swansea University scientists wanted a GREENER way to make them. And what’s greener than…GREEN TEA! Tea leaves contain antioxidants, which the team thought could replace nasty chemicals. So they set up their reaction in a beaker full of green tea extract.

And…it worked! Quantum dots formed, and floated through the solution like super small boba. Next, the scientists made sure their dots were useful. They deployed quantum boba to fight bacteria and cancerous lung cells. The tiny dots infiltrated these cells and destroyed them — from within!

Quantum dots are so useful that it’s crucial to find an environmentally friendly way to make them! Could green tea be the green key?

More research is needed before quantum dots taste as good as boba. But, they’re working on it!