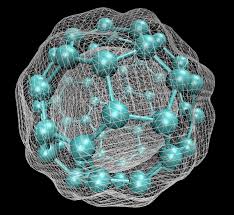 To understand electrons, scientists have developed a special technique called density functional theory – D-F-T for short. D-F-T is used to predict how electron crowds move in an unknown material. Could this be used to predict how living things move too?

Meet Professor Tomas Arias of Cornell University. His team let fruit flies loose and tracked how they moved. Then, they pretended the flies were electrons and applied D-F-T.

Turns out, crowds of creatures AND crowds of electrons follow similar behavior rules. D-F-T accurately predicted how the flies would spread into a new space.

They could even detect the flies’ overall mood! Flies that are hungry and frustrated buzz around differently. D-F-T could tell the difference.

The ability to detect subtle changes in movement patterns could be important for monitoring human crowds. A frustrated — or hungry — crowd might turn into an angry mob. Density functional theory could warn us before this happens!

There’s certainly a lot of BUZZ around this discovery!