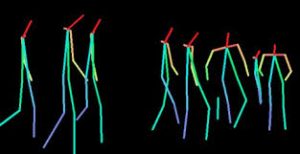 This is Sandra Tsing Loh with the Loh Down on Science, saying yeah, mine didn’t work either!

But, good news, kids! Researchers from M-I-T think they have a NEW way to see through walls.

Dina Katabi used radio waves to map people’s locations. This method works like radar does: radio waves bounce off objects and return to a detector. They can even pass through walls, like wifi. So Katabi could see WHERE a person was, but nothing else.

Enter artificial intelligence! The researchers used A-I tools to recognize a person’s pose in images. Then, they showed the computer the corresponding radio waves. The computer learned to recognize positions like a high five, simply from the radio signal!

Next, the researchers gave the computer radio images of people behind walls. The computer could “see” exactly what they were doing!

The researchers hope to use this technology in nursing homes. It could alert nurses if a patient falls.

So move over Superman, there’s a new hero — with R-RAY vision!