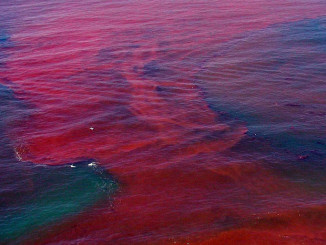 Could the new AA be algae-holics anonymous?

This is Sandra Tsing Loh with The Loh Down On Science.

Harmful algal blooms, or red tides, are bad news for everyone. Toxic red algae grow out of control. They poison shellfish and the people who eat them. Tiny shrimp-like creatures called copepods can eat some of the algae. But what keeps them from eating enough to curb the bloom?

To find out, scientists invited copepods to the University of Maine for an all-you-can-eat algae buffet. They found that dining on toxic algae doesn’t make the copepods sick. It also doesn’t hurt their ability to eat or reproduce. But it DOES make them engage in more risky behavior! Intoxicated copepods swim faster, kicking up a larger wake that’s more noticeable to predators. They also swim farther out from safety, exposing themselves to even MORE predators.

Thrillseeking copepods can’t scarf down harmful algal blooms if THEY are the ones getting eaten!

Now if only someone could control their risk-taking behavior! But don’t look at me – I’m busy raising teenagers!