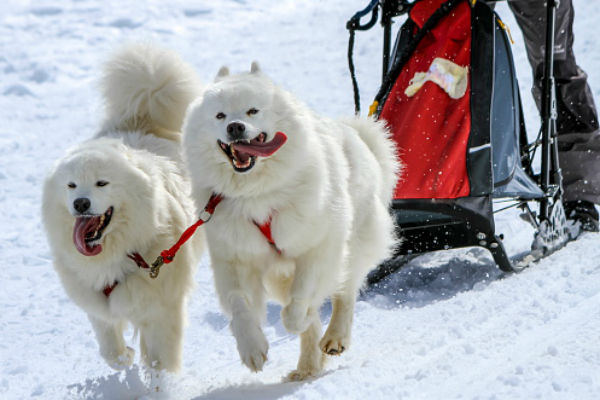 Did early man put his pets to work? Some ancient dog fossils show evidence of the spinal disease, spondylosis deformans. Does this mean the dogs pulled heavy loads?

Katherine Latham from the University of Alberta in Canada was canine-curious. She examined vertebrae from modern dog bones for evidence of the disease. She included bones from sled dogs, pet dogs, and wolves.

Results? About TWO-THIRDS of pets and sled dogs were afflicted! As for wolves? They had the lowest incidence – just twenty percent.

So what can fossils tell us about man’s best friend? When Latham grouped the bones by age, a pattern emerged! The LONGER the pooch lived, the more likely it had the spinal disease. There was no difference in old domestic pups and old wolves. NINETY percent of bones from canines over nine years old had the condition!

So, spondylosis deformans may indicate how LONG man’s first best-friends lived, NOT what they did for a living.

Could be that it was all play and no work for the dogs. Fetch, Fido, fetch!