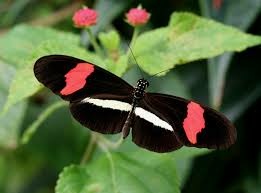 Can colors be scary and sexy at the same time?

This is Sandra Tsing Loh, with the Loh Down on Science, saying:
Yes! At least for butterflies.

Consider the heliconius erato butterfly of Central America. It sports a red band on its black forewing and a yellow stripe on its black hindwing. These markings scare off predators—but also help attract mates.

While a graduate student at the University of California, Irvine, Susan Finkbeiner decided to learn more. For instance, which is more important when it comes to protection—color or pattern?

She and colleagues created various model Heliconius wings. Some looked like the real deal. Some had different band colors. Others had grayscale bands, to isolate the effect of pattern.

They counted how often the models were attacked by predators, and how often male butterflies, er, romantically approached.

Results? Color trumped pattern both for avoiding attack and in attracting a mate. The colorless wings got attacked most and courted least.

But—no surprise? The wing’s natural color and pattern was the most effective combination in love and war.

This suggests some disturbing new Halloween costume ideas but, topic for another day!