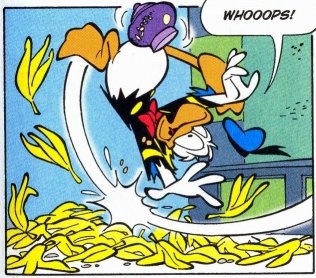 Slipping on a banana peel – Cartoon pratfall, or fascinating biology?

What makes banana peels so slippery?

That’s what Kiyoshi Mabuchi colleagues at Japan’s Kitasato University wondered. So they set up a scientific slip n’ slide! They placed a banana skin inside-down on a linoleum surface. Underneath the surface was a force transducer, which measures force, weight, and pressure.

Then brave volunteers stepped on the peel, and – whoopsie! Comedy ensued.

Based on the ratio of horizontal to vertical force, the scientists could calculate the friction of the peel, and give it a numerical value. Banana peel on linoleum? Point-zero-six-six, just slightly less slippery than Teflon.

Other fruit peels were tried too. While bananas were slickest, apples came in second. Not so funny? Tangerines.

Under a microscope, the researchers detected a gel-like substance coming from the squished peel – probably the source of the slipperiness. Mabuchi thinks this goo could be developed into a lubricant for artificial joints.

Next study: Can you really run off a cliff without falling until you look down? I’ve always wondered….