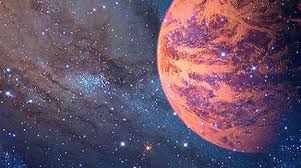 Unsure of when Mercury’s in retrograde? Blame Einstein!

Forwards, backwards – understanding Mercury’s kooky orbit has never been easy! Scientists were unable to do it for years.

Then along came Einstein with his theory of relativity. In brief, the theory states that large masses, like stars, bend the space around them. This changes how other objects, like planets, move.

With his theory, Einstein correctly predicted Mercury’s orbit – and its retrogrades!

However, University of Florida physicist Clifford Will believes Einstein’s prediction is slightly off.

Einstein calculated how Mercury navigates space around the sun separately from space around neighboring planets.

Will says that a more accurate calculation looks at the combined effect of the sun AND the planets. Turns out they all influence one another! For example, the sun’s pull on Venus changes the way Venus pulls on Mercury!

The resulting change is …tiny. About one degree of rotation over a billion years. But when unlocking the secrets of the universe… or mapping accurate space travel… every degree counts!

Now, can someone please calculate where all those extra socks go when Mercury does go into retrograde?