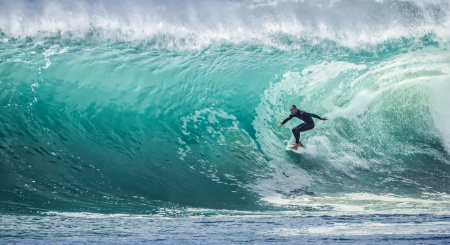 Surfers travel all over the world in search of the perfect wave. But even if you’re not riding monster waves in Hawaii, you deserve a good ride. It’ll happen, IF you can catch the wave’s elusive sweet spot. So what’s the secret?

That’s what surfer Nick Pizzo wanted to know. He studies wave dynamics at Scripps Institution of Oceanography. To quantify the sweet spot, Pizzo did the math. He painstakingly studied an equation that describes the motion of particles at the water’s surface.

Pizzo’s analysis revealed the sweet spot! Surfers riding near the crest of the breaking wave, inside the curl, get the greatest acceleration. Which increases their speed. So they travel further! Sometimes up to seven times further than in a slightly different position.

But this research is not just for surfers. It turns out that cloud formation is affected by the sea spray of breaking waves. So Pizzo’s research could improve weather and climate prediction.

And more importantly, how to catch some gnarly waves. Cowabunga!