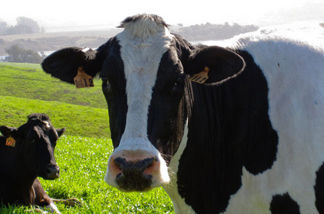 Where did the mysterious, pre-Roman Etruscan people come from? Ask the cows!

Thanks to a wealth of Etruscan artifacts, archaeologists know this: The civilization flourished in the first millennium BC in what is now Tuscany. But nobody ever figured out where the Etruscan civilization originated. In Italy? Or did they migrate from farther east?

Instead of carbon dating or computer modeling, Italian biologists turned to, yes, cows. Turns out, Italian cattle are descendants of ancient domesticated stock. The researchers compared the mitochondrial DNA of over 600 European and Asian cattle. Mitochondrial DNA is special DNA that’s passed only from mothers to offspring. It changes very little through the generations, making it useful for tracing lineage.

The DNA studies revealed that Tuscan cows are genetically more similar to Middle Eastern cattle than to other European bovines. Which means unless the cows sailed their own ships across the Mediterranean, they probably came over to Italy from the Middle East.

Which suggests, it is also the Middle East from whence the original Etruscans mooooooooved. Get it? Moooooved! Moooooved!