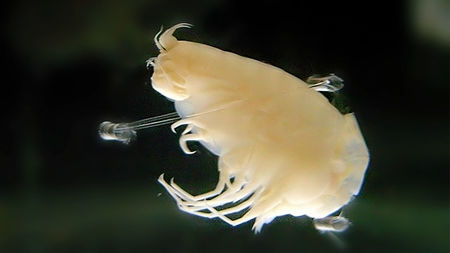 The shrimp-like critter, Hirondellea gigas has us all beat! It lives under EXTREME pressure, ten thousand meters deep underwater. How extreme? Eight-hundred times that at sea level!

Other crustaceans cannot survive so deep because their exoskeletons dissolve under such high pressure. So how did H. gigas adapt to such extreme conditions?

Enter Hideki Kobayashi at the Japan Agency for Marine-Earth Science and Technology. He collected H. gigas and analyzed their exoskeletons.

What did he find? Their exoskeletons were ordinary — but surrounded by a goopy aluminum substance! This acts like a suit of armor protecting H. Gigas from the extreme pressure.

Kobayashi thinks the critters extract aluminum in their stomachs from deep-sea sediment they eat. The aluminum turns into a gel when it’s excreted and touches sea water. H. gigas then smears this metallic goop over its body.

Their goo could give us insight into living in one of the harshest environments in the world!

Now, if I could just get that song out of my head! Dum-dum dum da-da dum-dum…