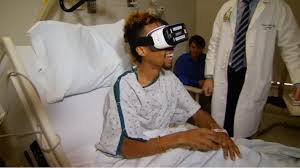 Will the next pain relief solution come in three-D?

Brennan Spiegel and his team at Cedars-Sinai Hospital wondered: could virtual reality do the trick?

They tried their theory out on two groups of patients. One group strapped on V-R goggles, and was immediately transported to a mystical world. There, they played simple games like shooting balls at oncoming targets. The other group of patients was distracted by watching a video on a large screen.

Two minutes later, both groups were asked about their pain levels. More patients in the V-R group reported feeling their pain melt away. And the AMOUNT of relief was much higher than that of the video-watching group!

The researchers plan on future gaming sessions to test the longer term benefits of V-R for pain reduction.

Till then, ask your doctor if V-R may be right for you! Or at least, Kandy Krush.