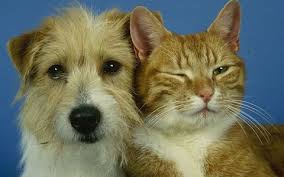 Dogs, and cats, and…bears? Who’s the smartest? Care to take a bet?

Suzana Herculano-Houzel, a neuroscientist from Vanderbilt University, hosted, if you will, a battle of wits. She believes that smarter creatures should have more neurons within their cerebral cortexes. So, she and her colleagues dissolved a variety of animal brains in (EEEK!) detergent. Once dissolved, these served as the perfect ‘brain soups’ for neuron counting.

So…does a bigger brain have more neurons? Not exactly. Poor bears, owners of the largest brains, turn out to be the LEAST smart! Dog lovers? Good news – your puppies lead the pack! Turns out they have three hundred million MORE neurons than cats, who came in second.

Raccoons get an honorable mention! They squeeze primate-like numbers of neurons into their cat-sized brains. At the very least, they deserve the title of most economic packer!

So, if you chose dogs…You’ve won the bet! Your prize? A goldfish.