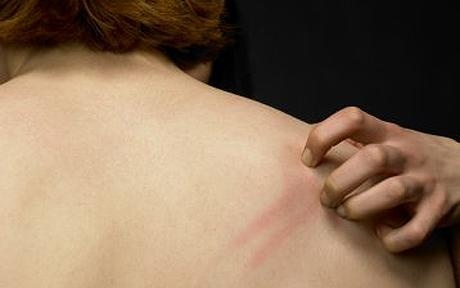 This is Sandra Tsing Loh with the Loh Down on Science, talking about an icky allergic disorder.

It’s called vibratory urticaria. And people who have it aren’t singing a happy tune. That’s because any vibration against their skin causes hives. Headaches. Sometimes a weird metallic taste in their mouths. Ew! But it’s so rare scientists have had trouble studying it.

Until now. Turns out in runs in three Lebanese families. In genetics-speak, it’s autosomal dominant. Meaning you only need one copy of the gene, from either parent, to get it.

Scientists from various national institutes teamed up to study the families’ genes. They say they’ve identified the disorder’s culprit! It’s a genetic mistake. In inflammatory cells called mast cells, one amino acid in one protein is switched.

That makes the protein more fragile. So when it’s shaken, it breaks. Which makes the mast cell release histamines. You know those itch-inducing chemicals: We counter them by taking anti-histamines.

Oh, well. Until they find a good good good cure for it, don’t sit near bass woofers. Ouch!