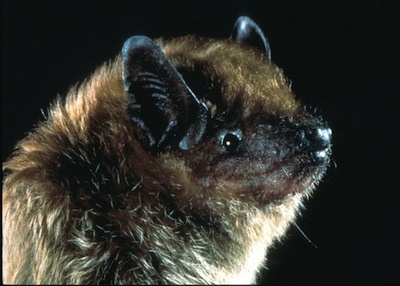 Overheard in the bat cave – conversation?

That’s what Genevieve Wright at the University of Maryland wanted to know.

To see if any might be food-related, the researchers tethered tasty mealworms to the ground in a large arena. Then they trained the bats to retrieve them. Meanwhile, they video-recorded the bats’ behavior.

Here’s what they found: Males hunting alone, or with a female, made no unfamiliar sounds. But when a pair of males set off, they made a series of calls, longer and lower in frequency than echolocation sounds. These sounds were highly individualized. So the researchers were eventually able to tell which bat was quote-unquote talking!

What exactly were they saying? Wright thinks the chattiest and loudest males were saying, “Back off, that’s my mealworm!” And it worked. The other male tended to move away from the food once the calls started.

One might even call it a … bat signal! Or not.