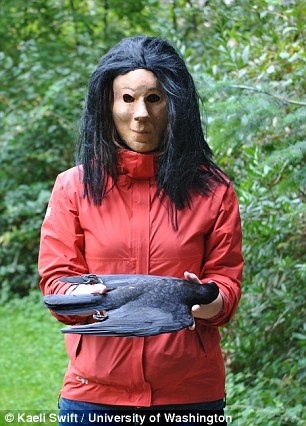 Animal grouping phrases: A parliament of owls! A murmuration of starlings! A murder of crows?!?

University of Washington researchers Kaili Swift and John Marzluff observed, and wondered: Why do crows gather around their dead?

To find out, first, the team earned a local flock’s trust. How? By scattering peanuts and cheese puffs. Later, at the trusted food pile, the volunteers uncovered a—gasp—taxidermied crow! This outraged the flock, who quickly mobbed the researchers. It gets worse. Along with stuffed crows, the team also presented stuffed hawks! —The crows’ most dreaded natural predator. Again, the crows mobbed!

Could all this attention really be a crow funeral procession? After all, viewing a dead pigeon didn’t ruffle their feathers one bit. The researchers believe crows study other crows’ deaths to avoid potential threats, such as hawks!

So the quickest way to a funeral may be “As the crow flies,” and—quick style tip—don’t forget to wear black.