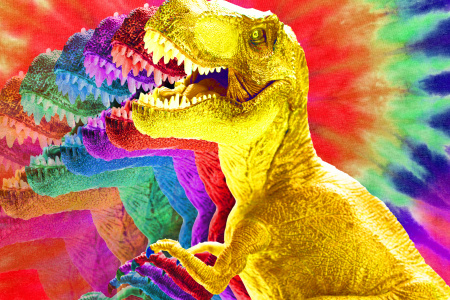 Did hippie dinosaurs get high on fungus?

If you ever see grain or grass with black nibs, be cautious!  That could be ergot: a toxic, parasitic plant fungus.

Ergot contains dodgy compounds, some poisonous, some hallucinogenic.  People have died from eating ergot.  The drug LSD comes from it.

Recently some amber drew attention from entomologist George Poinar, Jr.  Amber is fossilized tree resin; you’ve probably seen jewelry made from it.  Poinar is an expert in the fossilized life forms found trapped in amber.

This specimen encased an extinct grass blade, tipped with ergot!

Turns out it’s a hundred million years old!  The oldest grass ever found with this fungus.

Dinosaurs roamed the earth then.  And some, sauropods, were herbivores.  Poinar says if ergot was on grasses, sauropods likely ate it.  But we have no way to know how it affected them.

He does note that ergot is bitter.  Livestock who are fed ergot-infested grain quickly learn to refuse it.

Maybe sauropods did, too.  It’s never too early to just say no!