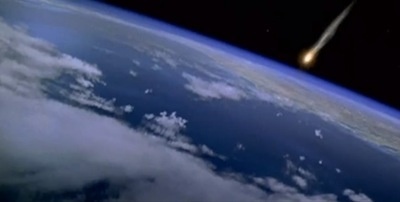 This is Sandra Tsing Loh with the Loh Down on Science, saying:  Maybe!

Our planet was a rough place before life emerged billions of years ago.  Volcanic eruptions, noxious chemicals in the air …  Oh yeah – and there was the Late Heavy Bombardment, a period when asteroids and comets plowed into the earth for hundreds of millions of years.  Fun!

But how could chemicals and asteroid impacts have combined to make life possible?

Well, a space-rock impact releases a lot of energy.  Scientists in the Czech Republic recently re-created asteroid impacts, but safely!  Using lasers, in a lab.  And to simulate the ancient Earth, they fired lasers at a stinky chemical called formamide, which was probably common in ancient times.

The laser’s energy started a chain reaction in the formamide.  And that formed genetic crumbs – in the shape of compounds found in DNA and RNA!  The building blocks of life!  So all that energy released when asteroids pummeled the planet could ultimately have led to you and me.

And the saying, “Life is just a bowl of formamide.”