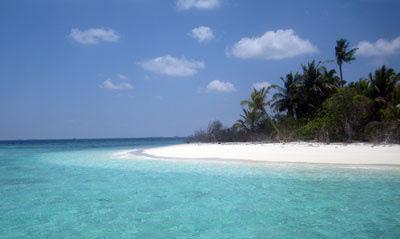 What do island paradises and diapers have in common?

This is Sandra Tsing Loh with the Loh Down on Science, with the poop on coral-reef islands!

These islands build up from sediment deposited over time. But where does that sediment come from? Sometimes, from parrotfish! To be specific, parrotfish poop!

See, parrotfish populate coral reefs, where they feed on animals called polyps. But instead of eating just the tender bits, they chomp the polyps’ hard coral skeletons too! When parrotfish do their “business,” it washes inside the reefs as stony, poopy sand. Gradually it builds up islands.

Researchers from Australia took a look at Vakkaru Island. It’s in the Indian Ocean. They analyzed which sediment-producing species lived nearby, and estimated how much sediment they produce. The number was staggering: over one-million pounds of material per year!

The team estimates parrotfish may generate as much as eighty-five percent of island-building sediment. Which makes them hugely important as sea levels rise.
So clearly, without parrotfish, beachgoers would be in deep doo doo. Actually, we are! Thank goodness.