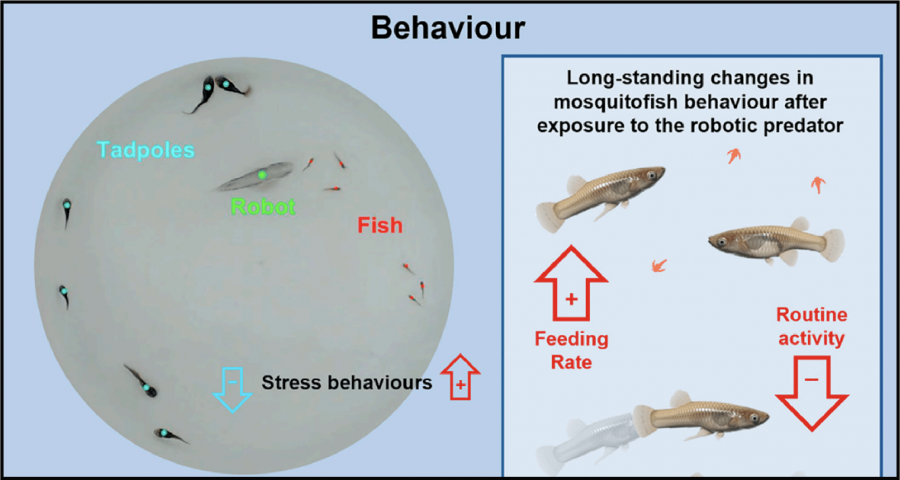 Enter the mosquitofish, hero-turned-villain. Mosquitofish were introduced in Australia to eat malaria-carrying mosquitos. But they ended up attacking native wildlife, like tadpoles. Can they be stopped?

Giovanni Polverino from the University of Western Australia and colleagues hope to stress them out!.

The scientists designed a ROBOTIC fish that mimics the mosquitofish’s natural predator. They filled twelve tanks with groups of invasive mosquitofish and endangered tadpoles.

When the mosquitofish approached a tadpole, the robo-fish CHARGED – stopping just short of attack! The robot’s computer vision helped it target the fish, NOT the tadpole. Half the groups were exposed to the robo-fish for hour-long sessions over five weeks. The researchers measured changes in the mosquitofish’s behavior, energy reserves, and fertility.

Results? Though the mosquitofish weren’t in any REAL danger, they were still stressed. They had less energy and lower fertility rates WEEKS later!

Mosquitofish are one of the most destructive invasive species on the planet. Robotic predators could prevent their spread WITHOUT harming native species in the process!

“I’ll be back, mosquitofish!”