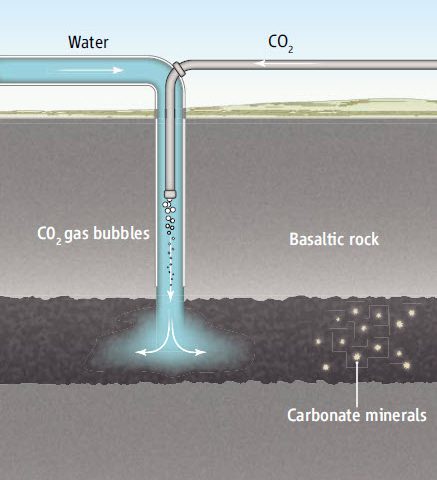 Could the solution to global warming be a stone’s throw away?

For years, scientists have attempted removing C-O-two from the atmosphere. One approach is called carbon capture and storage. It works by sucking up C-O-two from industrial plants and storing it in rocks underground. Rockstar idea! But limited by its cost and effectiveness.

However, an international team of researchers has found a way to bypass these challenges. Dubbed the Carbfix project, it tested a novel C-O-two storage strategy. Researchers injected a mixture of C-O-two and Hydrogen Sulfide gas into rocks. Injecting mixtures reduces the cost associated with purifying C-O-two. The gas was also dissolved in water, preventing it from escaping back to the surface. In just two years, over 95% of the C-O-two was transformed into rock. Faster than previously thought!

The groundbreaking study shows that carbon capture and storage is feasible to reduce C-O-two.

As for the gassy rocks? Better in than out, am-I-right?