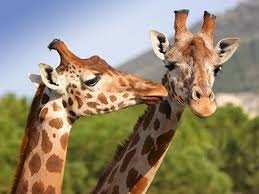 I still don’t know what the fox says. Giraffes, though, are another story!

Cats meow. Dogs bark. A sound has never been ascribed to giraffes, though.

It turns out, giraffes … hum. Show tunes? Hard to say. At just under one hundred hertz, the hum is barely loud enough for humans to hear. There won’t be any daytime performances, though. It seems zoo giraffes hum only at night.

As for what the humming means … Is it snoring? Small talk? Sweet nothings? The team is still in the dark on that one. They’re shocked giraffes make noise at all. The view had been that their long necks made sound travel, and thus vocalization, nearly impossible. So much for that!

Next, the team wants to use night-vision instruments to match the giraffes’ sounds to their actions.

In the meantime, add some music to the vocals and we may have a hit! No matter what the fox says.