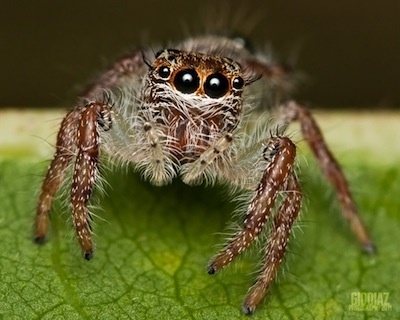 Spiders who love video games too much? Story at 11!

Jumping spiders are well-known for their good vision. But researchers have a hard time getting them to display natural behaviors in the lab. That’s why scientists at Australia’s Macquarie University are trying virtual reality.

Their setup? An itty-bitty treadmill aimed at a bowl-shaped screen. Walking on this lets spiders explore a one-hundred-and-eighty-degree virtual environment. Even more realistic? The scenery responds to their every move.

It must seem pretty natural, because the spiders’ VR behaviors matched up with real-world ones. For example, some spiders learned to locate their nest in the real world by looking for a colorful beacon. When those spiders saw the beacon in the virtual world, they went straight to it.

Scientists have also studied fruit flies, honeybees, and silkworms in virtual reality. So jumping spiders are just the latest happy customers to try it.

And with four sets of eyes, they don’t even have to wear those boxy headsets! Trust me: Not a good look for any species.