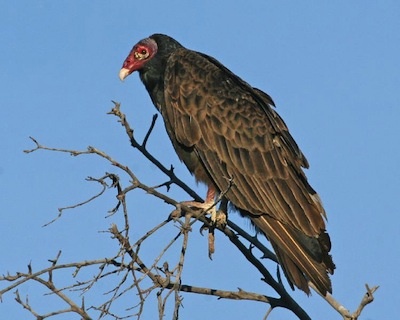 Ah, the vulture! It’s not just another pretty face.

Let’s face it. Vultures like their meat a little older and rottener than the rest of us do. It’s unorthodox, but it works for them. Still, it seems strange that week-old road kill doesn’t make them sick.

Researchers at the University of Copenhagen and the Smithsonian Institution wanted to know why. So they did a genetic analysis—of the bacteria colonizing vulture faces and stomachs!

The vultures had over five-hundred different microbes on their faces. That’s from plunging them neck-deep into rotting carcasses. Ew! But they had only seventy-six types in their guts. This included species that cause botulism and tetanus.

Why the difference between face and gut? Vultures have pretty hostile stomachs, destroying most bacteria that arrive.

As for why any surviving bacteria don’t make vultures sick? Vulture guts have adapted to poisons that would send us straight to the hospital. In fact, dangerous bacteria may actually help vulture digestion!

Which is why they make surprisingly good indoor pets! No!