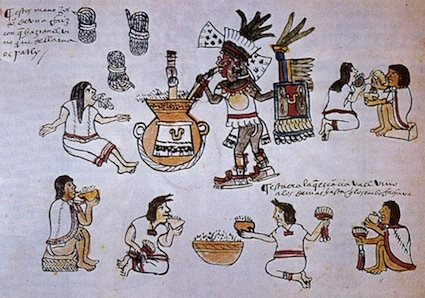 This is Sandra Tsing Loh with the Loh Down on Science, and possibly the earliest alcohol of Mesoamerica: Pulque.

Like Tequila, pulque is distilled from the sap of agave plants. The Aztecs drank it in the 1400s. And it’s still consumed in central Mexico today – with chips and salsa, we assume!

Archaeologists have now found chemical evidence of pulque in pottery vessels. These date back to 300 A.D.! That’s centuries before the Aztecs!

The pottery is from Teotihuacan, a major city back in the day. The team analyzed the vessels using mass spectrometry and gas chromatography. These techniques look for distinct chemical signatures. In this case? They revealed evidence of the bacterium Zymomonas mobilis, which produces alcohol from sugars. And it’s the main bacterium in pulque production!

Pulque looks milky, and reportedly has a sour, yeasty flavor. It’s also quite nutritious. The team says crop failures would have been common in the arid Mexican highlands. So pulque could have kept bellies full when maize and beans were scarce.

But, best of all? No worm in the bottle. Salud!