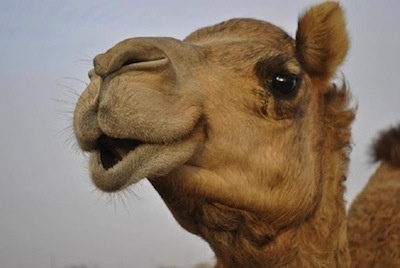 Do you know your animal farts? Pop quiz.

Who makes more flatus than your lovable but aging dog? Ruminating animals, like cows and sheep, that’s who. They chew their cuds at one end, and release methane gas from the other. Pee-yew! Around 20 percent of the world’s methane emissions comes from these critters. That’s a big contributor to global warming.

But rumor had it that ruminant-like animals, such as camels, don’t produce as much methane as true ruminants. Veterinarians from the University of Zurich decided to find out. Doesn’t that sound like fun work!

We’ll spare you the smelly details and cut to the chase: Marcus Clauss and colleagues say, ounce for ounce of food, camels spew the same amount of methane as cows and sheep. But the total amount of gas produced by camels is less.

That’s because camels’ metabolisms are lower. So they eat less, and thus produce less gas. That’s one shortage no one is gonna complain about!

The camel-milk lattes, though – that’s another story.