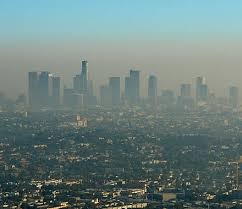 Does this smog make me look fat?

This is Sandra Tsing Loh with the Loh Down on Science, and a weight-gain study we hope doesn’t make you hyperventilate!

Who’s asking it? Environmental health scientists at Ohio State University. They wanted to examine how exposure to air pollution early in life affects health later on.

To do that, they turned to mice. They had the critters breathe air containing particles of pollution. Then they examined chemical changes in each mouse’s blood and fat. They also examined the amount of fat in each furball.

They compared those values to those of mice breathing clean air.

And? After only ten weeks, mousies breathing polluted air had more belly fat compared to control mice. Plus, their bodies didn’t respond well to insulin, which can mean diabetes is a future risk.

The researchers say pollutants irritate the animal’s lungs. That sets up a chain of stress reactions that leads to weight gain and problems with insulin.

Studies in humans have shown similar effects. But this study let the team fiddle with physiology more easily.