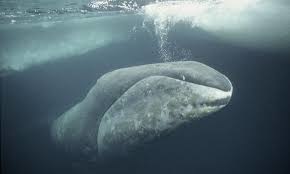 Forget Coachella – there’s a BIGGER music festival happening… deep in the North Atlantic ocean! The headliners? Breeding bowhead whales! All winter long, these whales flirt by singing songs to each other. Scientists record these seaside serenades as a way to track the whales’ movements. But new recordings have revealed some new Grammy categories.

Meet Kate Stafford from the University of Washington. She likens the humpback whale songs to classical music, while describing the bowhead whale songs as more… jazzy.

The researchers found that bowheads are constantly singing, and their songs are more freeform. And unlike other whales, bowheads NEVER repeat any songs!

So where’s all of this musical variety coming from? Researchers aren’t sure, but surmise that evolution is at play. Due to hunting, bowhead populations are small. In order to stand out in a limited dating pool, bowhead whales had to get creative!

Sounds like this jam session is a whale of a good time!