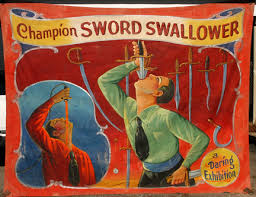 Which hurts more—creeping barefoot across a bed of hot coals, or shoving razor sharp knives into your arms?

This is Sandra Tsing Loh with the Loh Down on Science, saying: Neither! At least for members of certain street-performing family from Pakistan.

All six members were born with the inability to experience pain. Not even when they perform daredevil feats likehot coal-walking to earn a few rupees.

Geoffrey Wood of Cambridge University discovered why. A rare mutation in a gene called SCN9A. It blocks all pain, but not other sensory functions such as the ability to feel temperature, pressure, and tickling.

Cool, yes, but there’s a downside: In this study, all family members had either bitten off the tip of their tongue or had a serious injuries. Oddly enough, other mutations in the same gene lead to constant pain in folks with other inherited diseases. Understanding it could lead to a whole new generation of pain-killing drugs.

Although for the rest of us, it doesn’t take a genius to say hey, take an Advil. And . . . stop walking on coals! Ah! Much better. Thanks!