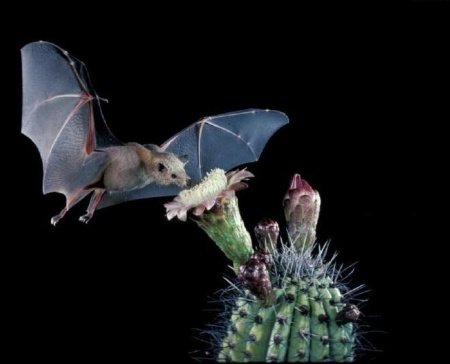 Is your margarita. . . endangered?

Insects like bees and butterflies are known for their pollinating prowess. When they feed on the sweet nectar from flowers, pollen rubs off on their legs. This pollen transfers to other flowers so they can grow fruit. Bats and birds also pollinate plants, but how does their work compare to our bug-eyed friends?

That’s where Fabrizia Ratto and colleagues at the University of South Hampton come in. They reviewed over one hundred experiments on plants pollinated by mammals – such as bats – and birds. They found something curious.

When plants are separated from their furry or feathery pollinators, they produce less fruit. On average, there’s nearly a two-thirds drop in productivity. When bat pollinators went away, even less fruit was made. The drop was over eighty percent! Bats are the main pollinator of the agave plant, used to make tequila.

Many of these animals’ habitats are shrinking. Protecting these areas will help save plant life. Especially in tropical climates, where the large pollinators are most common.

In the meantime, consider inviting Dracula to your margarita Monday! Salut!