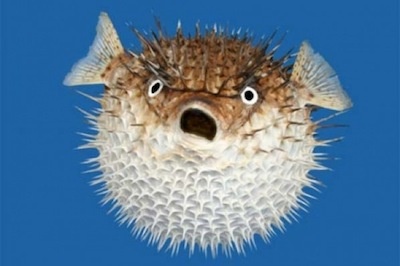 Now, for some breathtaking research on puffer fish!

Puffer fish famously inflate into spiky spheres that are difficult for predators to eat. To do so, they swallow huge amounts of water. Their super-stretchy stomachs expand like water balloons. It’s assumed that the fish hold their breath, by shutting down their gills, the entire time they’re bloated—for up to twenty minutes! Oh, really?!

After noting each fish’s normal breathing rate, they startled it—BOO! Predictably, each fish puffed up. But then? Its oxygen consumption skyrocketed! This means that the fish somehow huff and puff more when they’re inflated. Indeed, they consumed about five times more oxygen than usual.

So you can scratch breath-holding off the list of amazing puffer fish tricks.

Sorry folks, if you find that news, uh, deflating.